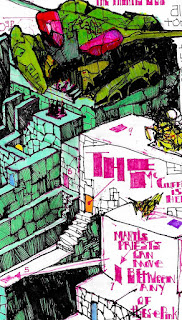 During one of the LotFP live streams last week the group chat got on the subject of Zak's Cube World which is currently on issue 20 (buy them individually here). I offered to run a game after another fan had mentioned he had a lot of interest in Zak's new material. I even asked my new friend which Cube World adventure he seemed most interested in playing. He picked Cube World 9 which aside from Temple of the Mantis includes 2 other adventures, one about a mountain that the party realizes is actually just a giant they have been traveling on, and another about a Wizard and his naval fleet on a river in the fast East. We're planning to the do the wizard naval battle one next!

The setting I used was 1700's Nigeria since I am also running the LotFP hex-crawl World of the Lost. I tried my best not to railroad the party so I used Zak's Vornheim city building book to have a few NPCs gathered outside of the temple. The players all knew we were just here to have some fun with a dungeon after all. One of the great things I've found with running Cube World is that the design and layout is great.
I prefer to use the Eldritch Cock rules for my games so the party consisted of a Magic-User who knew the Cleric spell word of recall (which is the only reason he survived this adventure alone), a fighter and a second Magic-User. The only problem I've come across with using the Eldritch Cock rules is that sometimes your lvl 1 characters end up with spells like Killing Word and Geas (which did in fact happen this game) but hey that's the fun right.
Running the dungeon was a cake walk. If you notice the colored doors in the art preview above they teleport to the other doors of the corresponding color. One thing I probably should have stressed more to the players is that the dungeon takes place in an abyss outside of the normal realm of earth. It's also important to the stress that the PC's light sources only reach 15'.
Only having 2 days to set this up I felt fine running the adventure because it's really less than 2 pages you're going off of. That being said though I did fail to establish the McGuffin so at the last moment I said heckin'-why-not and placed some kind of 'holy rod' from the Eldritch Cock book in the last room. After all I was only planning for this to be a one shot but the players strongly expressed that they want to play more Cube World games in the near future.
During the game I did share a few small pictures that I cropped to avoid spoilers yet also sharing Zak's awesome art style. The party almost made it out together with 5 mantis eyes worth 10,000 gp each. The last mantis was waiting for them right where they entered from earlier. The wizard with the holy rod gave it a shake not knowing what would happen... IT GREW! Beautifully to ten feet long which he used to pole vault over the mantis while his comrades were knocked unconscious. Unable to save them he managed to successfully cast word of recall and wake up in his sanctuary with only one ruby mantis eye.
If anyone wants to get a game going just leave a comment!

(here's a photo I made to help get the players recruited) 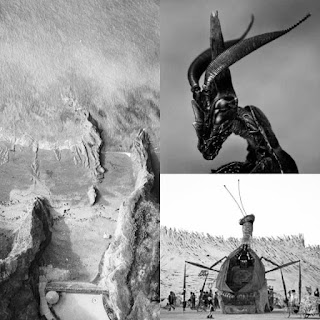