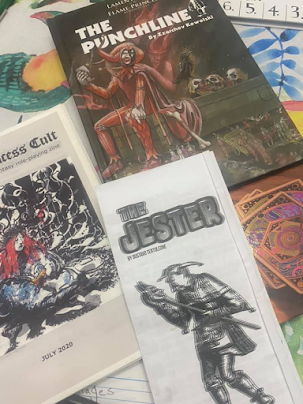 A few weeks back I found this new Jester class for the OSR and immediately wanted to use it for the LotFP adventure The Punchline. So I made a post in the Tabletop RPG One Shot Group searching for players. I ended up finding 5 international players. 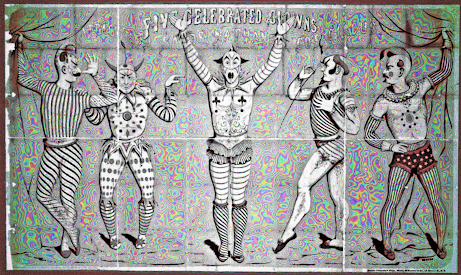 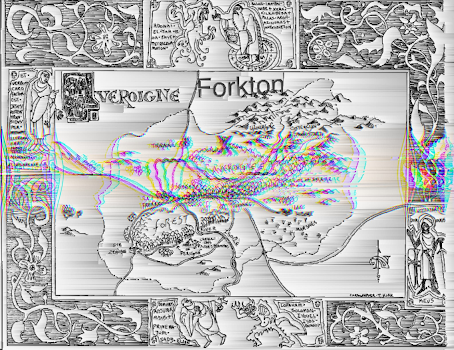 Averoigne, France. 1630. They found their way traveling down the French hillsides near Suisse fleeing from a lord they were each in debt to. After passing an abandoned French merchant's cart, which they didn't really care to spend much time inspecting, they made it to the small village of Forkton. This is where the LotFP adventure The Punchline takes place. 🤡🎺 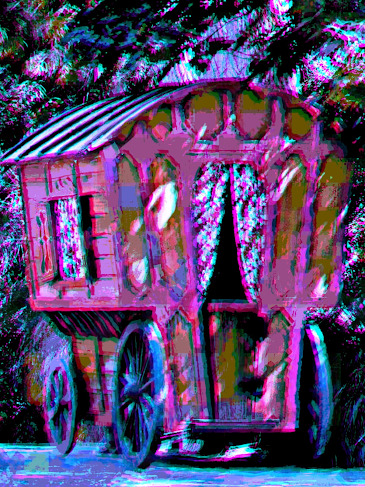 Alright boys and girls so when the party arrived they found the entire population all riled up with their farm tools outside the Azure Oxen (the only inn in town). Turns out an interrogation was going down inside. Seems children have gone missing and this foreigner passing through was suspect. He wore such fine clothing that he resembled the descriptions of these Jesters or Clowns that have been seen in the woods lately. 🤡🎺 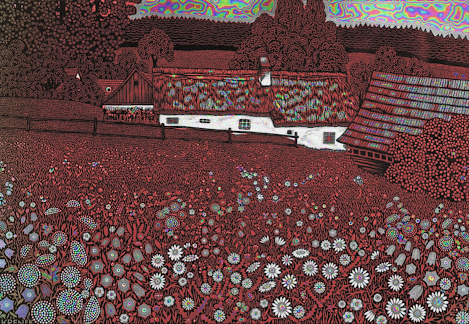 A French traveling merchant was tied to a chair being questioned by one of the towns woodsmen who saw himself as a tough guy. It was obvious he was innocent but the posse kept throwing him under the  bus. By bus I mean the woodsman's mallet. The merchant offered to do a card reading to help with finding the missing children. He explained how the cards worked and everyone agreed to untie the man's hands. I won't go into too much detail here but everyone drew a card (from the LotFP deck of weird things). The barbarian ended up becoming immortal but he will forever be stuck as a lvl 2 fighter. Each of the magic-users became cursed, but one had to consume a gem which will not pass through his body each day. Failing to eat a gem made him lose health. 🤡🎺 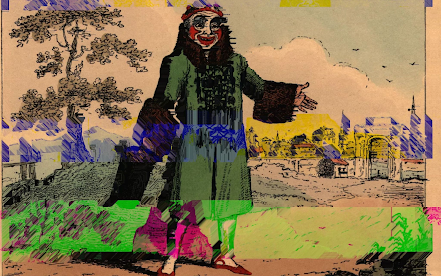 Upset about this whole new stigmata each character gained, the barbarian chopped off the man's hands killing him. Desperate for some new young adventurers in town the mayor offered them sheriff badges if they could solve this case. Now equipped with a map of the area the party began to investigate the watermill first. 🤡🎺 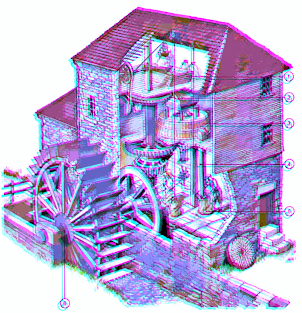 This was it. The party crossed the river and found 6 horses tied up out under a tree near the mill. Emery snuck around the front entrance. Peeking in a window one clown was seen in a polka-dotted dress dancing around insane with a rapier. They didn't really have a plan other than to send the newly immortal barbarian in first. He killed the first clown pretty easily from what I remember with his ax but was covered head to toe in blood. I believe he heard some bells ringing from upstairs and ran out. So everyone started blasting and it turned into a shoot out. A group of clowns bombarded the poor hired gun Luis with meat cleavers. Gashing him twice in the neck, he bleed out just at the back door's step. Again back to the Jester class that I was using to spice up the clowns in this book, at one point a clown rolled for a chaos trait from the table and got an ACME delivery boy to bring her a loaded gun. "Don't worry guys I've got this!" Malou said as he attempted to grapple the clown using his whip. He failed and took a shot to the gut. The party ended up defeating the handful of clowns here. Faruza's dog must have gotten involved in the combat as well because he was pissing blood in the end. The poor guy was left tied to a tree. I believe the players assumed he was sick and they couldn't do anything for him out fear for perhaps catching something themselves. Losing their hired help Luis and with Malou unconscious they took all the horses and rode to town with the sound of bells approaching them in the woods.  Once they got to the stables and had a breather they searched the saddle bags. One thing of note found was a sack filled with some powder and a key. They ended up calling the substance Clowncaine. The only other items they found of real interest to them were all the costumes, wigs and powder. The mill wasn't searched. The children weren't found.  🤡🎺
I will be recapping the next session soon.
ᶘ ᵒ㉨ᵒᶅ Rusty James at 9:12 PM