(if you're on your phone scroll down and select view web version. when it reloads hit play on the video to listen to music while you read if you like)
The voice of a talkative Wet Grass Beast calls out to the party. 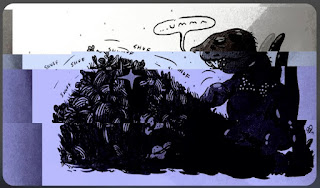 (photo i edited from the book)

Steam rises from rain hitting the hot coals. But there's not a fire. There's a mound of mud, sticks and wet grass beyond the coals. It actually seems cozy. A few flowers are included.

Frogbroth's disconcerting white eyes lock with the figure that spoke. Their eyes are dead.

"I'm Sail-Gem." The tall permian throws brush on the coals. A fire starts to burn.
"I love polkadots." Harpnoodler compliments Sail-Gem's bow tie.
"Mmms. Yes. Thank you. You have a lovely shell. And you..." Sail-Gem nods to Frogbroth. "Is that a voidstar?"
"Indeed Sail-Gem. I'd like to summon another tonight."
"Have you heard of the pretty dig?" Sail-Gem asks, placing a pot on the fire. The flames don't seem to bother her as it clearly burns her flesh for a second.
"The pretty dig?" Harpnoodler holds a thin stone tablet and her eyes narrow on Sail-Gem.
"I knew a digger I did. From 'round up there. It's a hole... to the North. That's where I'm headed. I'd like to see them again."
"Are you dead?"
"I've never been so alive."
Sail-Gem serves a bowl of stew that smells ripe to Frog and Harp. Harp heals 5 stamina from the meal and Frog offers her serving to Harp. Harp heals another 1 stamina.

Frogbroth leaves the fire and makes her way into Sail-Gem's brush tent bedroom. She blows out their candles and calls to the voidstar constellation. The spell fails and she feels betrayed. She calls her lone voidstar to her face and settles in for the night. The voidstar vibrates against her smooth skin. She calls upon the constellation of dead wisdom. Nothing happens. She cries clutching her ancestors toothed necklace until she falls asleep.

In the morning the party awakes on opposite sides of the brush tent. Frog looks over and harp and all she can see is her and slightest sound of snoring. Sail-Gem is nowhere to be found. The coals are still hot. There are tracks leading into the marsh east.

"Well that's where we're going too." Harpnoodler and Frogbrother hold each other as they walk eastward.
The rest of the day is a short, streamy rainstorm, then more sunshine. Frogbroth wishes she grabbed the flowers from Sail-Gem's camp.

"We made it." Harpnoodler says, overlooking many streams that surround a village in the distance centered between two large orange hills. As the sun sets Harp winks at Frog.

Frogbroth lies down on some rocks near the stream and Harpnoodler levitates beside her. Harp lays a tentacle on Frog's hip but and Frog readjusts herself. Harpnoodler retreats her tentacle and they soak up the last bit of sun.