Pretty Paleozoic Pals part 4 (I invited a friend to play a session with me!)

Walt is playing Moonbeam, a Fern Hag from Dry Wind Gap. (he's heard about troika before and bought some of their books recently) We met while both attending Memorial University of Newfoundland circa 2009. More on that story another time. I asked Walt to send me something to post on the blog. Let's start with Moonbeam's side of the story...

The leader of the town of Dry Wind Gap, left earlier in the day and had yet to return. When Bubble Eddie's away, Moonbeam will play! In an attempt to hone her skills, Moonbeam wanted to fish. She hoped to catch a coelecanth but really any fish would do for a bedtime snack. She put her front quarters into the river and thrashed about. Nothing! As she stepped backwards out of the water and let out an exasperated sigh she noticed two travellers about 100 feet away. One was a dimetrodon with a beautiful sail and the other was floating about the ground, a squid-like blob.
'Hey! Hey you, squid girl!' Moonbeam called. The squid-like creature who was holding a number of stone tablets said 'my name is NOT Squid Girl. I am Harpnoodler...' and she chattered on with annoying facts about herself that Moonbeam did not care to pay attention to. Frogbroth the dimetrodon was next to introduce themselves. Moonbeam learned they had been travelling for 3 days and were weary and needed to rest. Frogbroth and Harpnoodler asked Moonbeam if she knew where they could find a friendship bracelet. As Moonbeam was allied with the Guild of artisans and crafters in Dry Wind Gap, she knew it wouldn't take Bliss long to whip one up. 'I think I might know someone in town who might make friendship bracelets,' said Moonbeam - careful not to reveal too much information to these strange travelers from a distant land. Moonbeam was aligned with the elder crafters and artisans guild in her village. There were three kooky dimetrons that were a part of this artsy group. Mud, a quiet and shy dimetrodon who is a cermacist in Dry Wind Gap. Mud made all types of pottery and earthenware dishes, but she would put her own unique spin on them -- incorporating bits of insects and bugs into each piece. Splish, a rough and tough butch lesbian dimetrodon that doesn't take no shit and don't need no man. Splish makes watercrafts and vessels to traverse the rivers and bays outside of Dry Wind Gap. She's a real hammer and nails kinda gal. And lastly, there's Bliss - Moonbeam's closest friend. Bliss is a hippie dimetrodon at heart, one who follows only good vibes and chill flows. Bliss makes beautiful garments using organic fabrics as well as accessories. Although the elders are generally fearful of flowers as they are new to the Permian period, Bliss embraces them and wears a flower crown on her head of yellow and white flowers. Hey, a garment maker has got to keep up with the latest fashions, right? Even if she is a bazillion years old! Frogbroth decided to try to catch a fish and plunged themselves face first into the river. They came out with a fish flapping in their mouth and dropped it on the bank of of the river that was covered in algae. It flapped about. Moonbeam offered Frogbroth and Harpnoodler to stay with her and the other guildmembers for the night and they obliged. Frogbroth tried to catch another fish to bring with them to the village as a token of their appreciation but was unsuccessful. The fish they caught and cut into fillets with a stone would have to do. The sun was almost fully set when Moonbean encouraged them to all head back to the village. So off they set, for Dry Wind Gap. 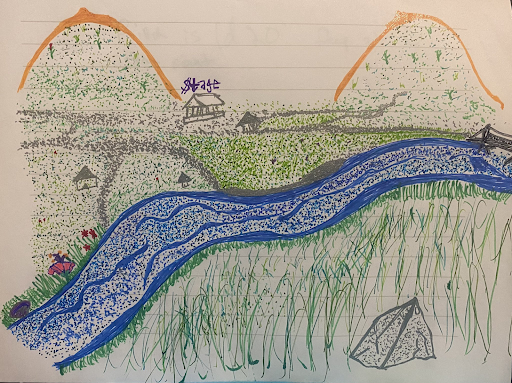